A Little Bit of Dune History

The history of Silver Lake Sand Dunes began in 1920, when Carrie E. Mears, the daughter of lumber baron Charles Mears, donated 25 acres on the east side of Silver Lake for park purposes. In 1926, the federal government transferred 900 acres of land to the state, which then became Sand Dunes State Park in 1949.

Based upon a 1949 master plan, Sand Dunes State Park merged with Silver Lake State Park and the new boundaries were dedicated in 1951. The park activities are not just limited to ORV, but also include: camping, hunting, swimming, hiking, boating, fishing, beach going, and picnicking. 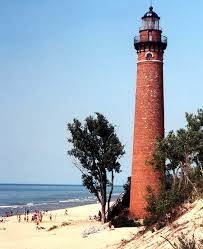 In 1871, it was determined by the Light House Board that a new lake-coast light was needed, and Congress appropriated $35,000 for the lighthouse on June 10, 1872. Over forty acres of what was public land was set aside by President Ulysses S. Grant and in April of 1873 construction began.

Once the foundation was prepared, work began on the brick tower, which grew to a height of roughly 100 feet. The tower housed lantern room which was installed to house a third-order Fresnel lens. Every eleven hours, the keepers would wind a 90-pound weight that was suspended between the tower’s inner and outer walls to power the revolving mechanism. A covered way connected the base of the tower to a twelve-room, 2½-story dwelling, built for the light’s two resident keepers.

History of the lighthouse adapted from the website: www.lighthousefriends.com

What do YOU love most about the Silver Lake area? Share your shots with the tag #ThinkDunes for a chance to be featured.

"If I cannot do great things, I can do small thing

Plan your trip now at: https://thinkdunes.com/fro

It’s beginning to look a lot like Christmas in W

This time of year, the only foot prints in the san