Music On The Commons-Downtown Hart 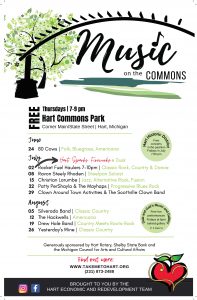 Bio: 80 Cows is an acoustic, eclectic blend of folk, bluegrass, and other forms of Americana music, with some original tunes mixed in for added flavor.

Bio:  West Michigan’s good time band, playing billboard hits from the 70’s to today. From Sweet Caroline”, to “Sweet Child Of Mine”.   This band has quite a following in West Michigan, and have played all over the State. They will be featured during the 2021 Hart Sparks Independence Day Celebration.

Bio:  Ravon Rhoden, also called “Steely” is from Montego Bay, Jamaica.  With eighteen years’ experience in his field, Ravon, holds an extensive repertoire of 3000+ songs inclusive of Reggae, Calypso, R&B, Latin, Blues, Jazz, Rock, Pop and Soul music. They are highly influenced by musical icons such as Bob Marley, and Michael Jackson just to name a few.  He has a strong passion for music and has graced the international stage with his steel drums and his unique way of musical influence.  Ravon has worked for top companies like the Disney cruises ,Celebrity cruises and Holland America cruises.

Bio:  As a guitarist, Christian has performed with Chicago blues legends Jimmy Burns and Corky Siegel. It’s not unusual to see him perform with Frank Orrall (Poi Dog Pondering and Thievery Corporation) and was part of Los Inmortales de Chicago, one of Frank’s side projects.

Bio:  In late 2019, Patty PerShayla & The Mayhaps pulled up to the Michigan music scene in a vintage van, well stocked with songs and stories (but not seatbelts). Coming off her solo EP, Oracle Bones (winner of the WYCE Jammie Award for Best Rock/Pop Album of 2019), Patty brings the same sweet but powerful voice and whimsical lyricism bar, club, and brewery-goers throughout the state and beyond have come to know and love, cranked up to 11 with guitarist Lucas Powell and drummer Alec Klinefelter.  Patty dons the bass guitar in this genre-bending power trio, boasting an eclectic and authentic sound with a strutting, stomping, crooning good time onstage.

Bio:  The Hackwells original songs remind us of our life and times here in the beautiful state of Michigan.  Brian McCarty on guitar, Jeff Schott on bass, Larry Everhart with harmonica, John Dobat on guitar and banjo. Call it roots, Americana, whatever. The Hackwells believe in substance over style, that a good song is a good song, and the song should determine the feel—that’s the Hackwell way!! With songs like “Gather Round”, “Shipshawana Mama”, and “Playing for Tips”, it will be hard to stay in your seat!

Throughout Michigan, the name Drew Hale is synonymous with powerful vocals, compelling lyrics and haunting melodies. In 2016, Drew won the national Country Showdown competition held at the Ryman Auditorium in Nashville, earning him the title Best New Act in Country Music, as well as the $100,000 cash prize.

He and his band can be found touring throughout the Midwest and Texas, promoting their latest album, “Roots and Wings”. They’ve shared the stages with some of Nashville’s biggest recording artists, including Tim McGraw, Frankie Ballard, Dierks Bently, and many more.  With this band you can always count on an electric show that delivers a dynamic combination of originals and covers that bridge the gap between country, roots rock, and blues.

Bio:  This Country band has many years of experience under their belts. They cover artists like Willie Nelson, Merle Haggard, Waylon Jennings and Hank Williams Sr. and Jr. Their influences range Jimmie Rogers to George Strait, and countless others.

They have played many West Michigan locations including the New Era Fall Festival.